Crude oil is a natural product that mostly consists of hydrocarbons with trace amounts of nitrogen, oxygen, and sulphur. It is made up of the remnants of plants and tiny creatures that have been buried for millions of years under the surface. Because of its widespread usage in our daily lives, crude oil is regarded as one of the world's most essential energy sources. It is utilized in waxes, lubricants, asphalt, and other petrochemicals in addition to fuel and heating, which are then used and evolved into more familiar items such as plastics, clothing, and so on.

Another fascinating statistic about oil is that these nations account for about half of the world's daily output of 92.65 million barrels per day (bpd).

Maciej Kolaczkowski, Manager Oil and Gas Industry from the World Economic Forum's Energy, Materials, Infrastructure Platform, explained the impacts on inflation and the key factors determining oil prices, how prices affect the global economy, and the implications for the energy transition in mid-February 2022, when the crude oil price was approaching $100. He stated that "no one has a crystal ball," and yet Russia launched a war in Ukraine one week later.[a]

Oil prices skyrocketed because of events in Ukraine, adding fuel to an already raging inferno. Brent crude surpassed $130 per barrel in early March, while gasoline prices just reached a new high of $4.331 a gallon, up more than 15% from a month ago.* 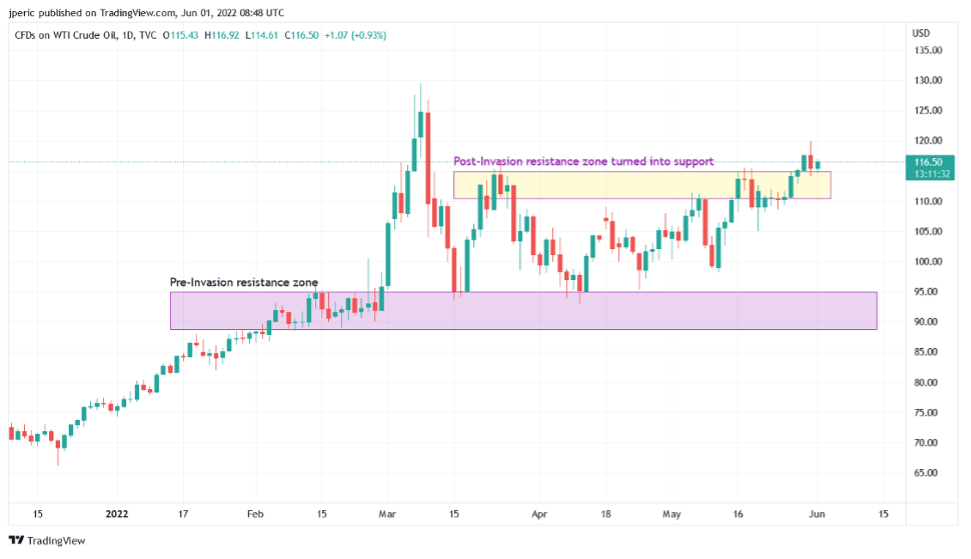 What did the market said to do?

OPEC+ is expected to meet later this week, and sources claimed on Monday that, despite the EU's (widely predicted) embargo on Russian oil imports, they will maintain their current strategy of 432K bpd monthly output rises. Slowly rising output by the group. Furthermore, the collapse of Russian output from pre-Ukraine invasion levels has led to a considerable tightening of global oil markets.

Crude oil imports from Russia will be phased out over the next six months, and while oil transported by pipeline is free from penalties to appease landlocked Hungary, other EU countries that buy a lot of Russian crude oil will face sanctions. All eyes are now focused on the agreement that Hungary and Slovakia should reach with Croatia about their oil pipelines. In all, by the end of the year, the EU will have phased out 90 percent of its purchases of Russian oil, dealing a devastating blow to Russia's energy industry.

As we can see on Image 1, oil prices reached above resistance zone, and it’s going towards 120 USD per barrel. Usual high volatility in the WTI crude oil prices is underpinned by RU-UA conflict, as well as the still visible consequences of the COVID-19 pandemic.

Solutions to global problems, or at least glimpses of solutions, could encourage a reduction in volatility, and consequently a slowdown in oil prices.

Until then, technical analysis shows there could be continuation of the prices. A strong dollar does not seem to be able to strengthen indefinitely, and its weakening due to the tighter monetary policy of the ECB could push the price of oil even further above 120-130 dollars per barrel.[1] 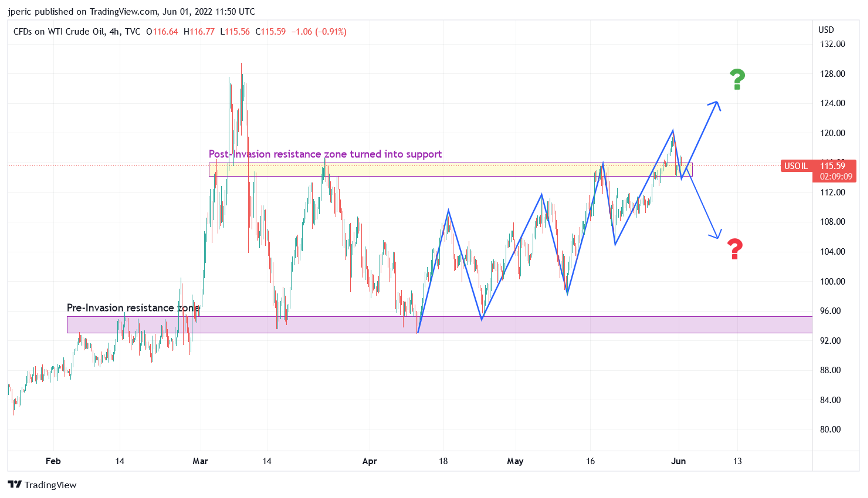 After the price retested so called “Pre-Invasion” resistance zone for 2 times, it created an upward trend with higher highs and higher lows like in Image 2. Price tested so called “Post Invasion” resistance zone, breached it, turned it into support zone now. If the support zone holds, we could see retesting of 127-128 zone, and maybe we could see new highs.[2]

[1,2] Forward-looking statements are based on assumptions and current expectations, which may be inaccurate, or based on the current economic environment which is subject to change. Such statements are not guaranteeing of future performance. They involve risks and other uncertainties which are difficult to predict. Results could differ materially from those expressed or implied in any forward-looking statements.