Amid inflation threat across the CEE region, Croatia seeks a safe haven by adopting Euro

Croatia sets its path to adopting Euro as its currency in a “last minute” time when volatility and instability are growing in the world, especially across the Central and Eastern Europe.

While the Czech crown (CZK), for example, is moving up and down in percentage terms on a daily basis, the Croatian kuna (HRK) is much more stable, currently only 0.5 % above the level that was set as the central rate (1 euro = 7.53450 kuna) in 2020, when Croatia joined ERM II.

The Czech National Bank is strongly intervening against the weakening of CZK, which is causing volatility. The actions of the Croatian National Bank, on the other hand, are aiming at the stability of the kuna exchange rate against the euro, which is the nominal anchor of its monetary policy. 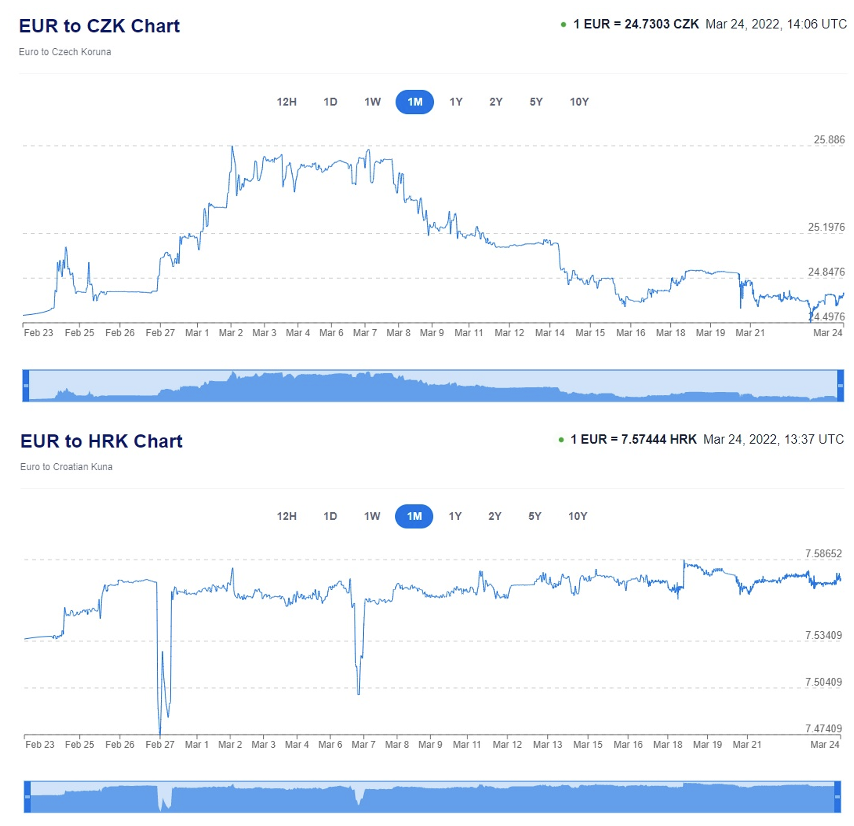 Euro to be approved by Croatia in April

The final text of the Euro Law should be sent to the Croatian Parliament for a second reading in April, according to the government of the Republic of Croatia. If the EU Council votes on Croatia's eurozone membership in July and adopts a fixed exchange rate. In addition, there are 78 more legislative initiatives that will be altered completely or largely as a result of the euro.

What will happen to loans after joining the eurozone?

The principle of loans in euros will stay unaltered, while loans in HRK, as well as loans with a currency clause in euros, will be converted into euros at the medium exchange rate, i.e., EUR/HRK 7.53450. [3]

Looking at the longer term, all these nations had considerable interest rate reductions, therefore the long-term interest rate was mentioned in Slovenia, but otherwise the rate used for convergence evaluation decreased from 4.53 percent in 2007 to 1.71 percent at the end of 2015. Today, for example, all these countries have interest rates of 0.16 percent or less, but Croatia has a rate of 0.45 percent.

In general, joining the euro area is expected to lower interest rates and thus lower loan annuities, but it should be remembered that variable interest rates are primarily determined by ECB decisions, and it is possible that the ECB, in the face of rising inflation rates, will begin by raising reference interest rates, which will lead to an increase in annuities over time. [5]

[1,2,3,4,5] Forward-looking statements are based on assumptions and current expectations, which may be inaccurate, or based on the current economic environment which is subject to change. Such statements are not guaranteeing of future performance. They involve risks and other uncertainties which are difficult to predict. Results could differ materially from those expressed or implied in any forward-looking statements.